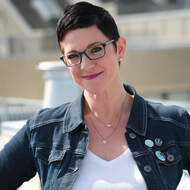 Annalise Ophelian is an award-winning documentary filmmaker, psychotherapist, and consultant based in San Francisco.
Two years ago I set out with my camera to talk to fangirls. While I was inspired by my love of so many geeky things, Star Wars was my first fandom, and it’s the one I’ve come back to throughout my life. It also seemed like a good assemblage point, as the most recognizable media franchise in the world, spanning over 40 years and every conceivable format. Bonus points that I’d get to hear about and talk about something that brought me a lot of joy for the years it took to complete the project.

The thing about documentary is you don’t know what it’s about until you’re done. You can go in with an idea of what the story is, but you’ll probably be wrong and it’s best to hold your expectations lightly. You lean in. You listen. You ask follow-up questions. You consolidate what you’ve been told the best that you can, you go back to the people who were gracious enough to tell you their story, show them what you’ve done, and ask: “Did I get this right?”

Looking for Leia began as in inquiry into the experiences of women in Star Wars fandom, an exercise in shifting the traditionally cis male narrative of geekdom to tell the story from another set of perspectives. Over the course of two years, after speaking with over 100 women as well as non-binary fans, here’s some of what I learned.

The most visible aspects of fandom — the social media discourse, the click bait headlines about conflict and obsession, the toxicity, the people who spend small fortunes on cons and costumes and collectibles — are only one facet of what constitutes fandom. I’d argue they’re a small facet at that.

What we don’t see nearly as often are the stories that take more than 280 characters to tell. Stories that don’t compress into a headline, that aren’t about the first, the last, the best, the only, that aren’t about litmus tests or proving grounds. What we don’t see are the ways fandom is a type of alchemy, in which a base material is transformed through inexplicable magic into something precious and entirely new.

These are the stories in Looking for Leia. We’re not saturating a topic or explaining a phenomenon. How could we, when there are as many expressions of fandom, as many stories to tell, as there are fans in the world? We’re telling a handful of stories about the ways fandom is an active state of creation, a love of a story that extends beyond beyond the object of affection, transforming it into something original, imbued with the unique passion of its creator.

There’s something amazing that happens when you ask someone why they love a thing, and then lean in and really listen. Loving a thing is an act of connection, but also an act of seeking, of looking. For ourselves, for each other. We can’t love a story without also looking for ourselves in that story, imagining ourselves into greater worlds. And when we do that, we create something new.

I’ve loved hearing these stories as they were told to me, I hope I’ve done them justice re-telling them to you. For each person who appears on screen, there are tens of thousands of fans out there in the world finding identity, connection, and meaning in their love of these stories. I hope watching Looking for Leia makes us all want to lean in, and listen to each other more.

May the Force be with you,

Zach Prewitt (Editor) is a film editor based in Seattle whose company, Plot Point Productions, specializes in film marketing. He loves a good supercut, movie trivia night, and his older sister Annalise, who was his first Star Wars friend. @PloPoPro

Alyssa Bradley (Art Director) is an illustrator, designer, videographer, podcaster, and photographer with a penchant for the whimsical and nerdy. During the day she’s a media production specialist at Michigan State University, but at night she’s frantically drawing fan art and weeping over fictional characters. Learn more about her work and fangirl with her over at www.whimsydesignandillustration.com
​
Christy Carew (Original Score Composer) is a composer for film, TV & multimedia who's been a verified Star Wars fangirl for 30 years. When she's not composing music for a wide variety of visual storytelling, you can find her on Tumblr blogging meta-analysis about John Williams & the music of Star Wars, or in the back yard teaching lightsaber forms to her kids. www.christycarew.com

Kayla Martin (Social Media Coordinator) is a freelance writer and SEO content creator with a lifelong passion for Star Wars. Her daily inspiration and first love is forever Carrie Fisher.  A pansexual cis woman, Kayla's personal mission is supporting LGBTQIA+ communities through her work as a patient advocate. During her off time you'll find her bringing smiles to kids while doing charity work as a Leia costumer in the Rebel Legion.

Emilia Quinton (Camera) is a cinematographer, photographer, and writer. She is proudly mixed race and transgender, attempting to navigate a complex quilt of identities through art. www.emiliaquinton.me

Gwen Park (Camera) is a freelance cinematographer and photographer based in San Francisco. Her work has appeared in print and online in publications such as Where Magazine and the Bay Times. Gwen is a past Executive of the San Francisco Trans March’s Board of Directors, and is frequently found documenting arts events and public demonstrations for the San Francisco trans and queer community. www.gwenpark.com

Catrina Dennis (Assistant Producer) is a Jill of All Trades writer, producer, host, and social media strategist whose work has appeared on Geek & Sundry, SyFy, and starwars.com. www.ohcatrina.com @ohcatrina
​​
Amy Richau (Research) is a writer who currently contributes to the official Star Wars website. She has worked as a film archivist and preservationist at the UCLA Film & Television Archives, YCM Laboratories, and the Lucasfilm Film Archive. Amy is currently working on a project highlighting a Star Wars character, actress, writer, or film crew member every day at 365starwarswomen.com @amyrichau

StormMiguel Florez (Co-Editor/Location Sound) is a trans Latinx multi-media producer and editor whose previous work includes MAJOR! (2015) and I’ve Been to Manhattan (2012). He's currently at work on The Whistle, about secret codes used among young Albuquerque lesbians in the 1980s. StormMiguel and Annalise are a husbynd and wyfe team who regularly collaborate on each other's productions while raising three chihuahuas. www.stormflorez.com @StormMiguel
​
Maria Breaux (2nd Unit Director / Camera) is a writer, director, editor, cinematographer, and producer who’s had films screened internationally. Her focus is on marginalized characters in unique predicaments. Her work includes Funcle and Socorro (both premiering at the San Francisco Transgender Film Festival),Mother Country (winner, Silver Remi, WorldFest-Houston), 99% - The Occupy Wall Street Collaborative Film (contributing cinematographer, world premiere at Sundance), and Lucha (Winner, Frameline Audience Award). She also received a grant from the Theatre Bay Area New Works Fund for her full-length play, The Mark Ten’s Fantastic Parade. www. mbreauxsia.com @mbreauxsia
​
Alice Doye (B-Camera) is a U.K. based camera woman and motion graphics artist; she recently graduated from the University of Winchester with a BA (Hons) in Film Production and is currently working towards completing a Masters degree in Digital Media Design. A Rey cosplayer, and lover of Star Wars, Shakespeare, and coffee.
​
Joceyln R.C. (B-Camera) is a New York City-based, West Coast-raised, left-handed, right-brained, gold-hearted art director with a background in live-action-based visuals and narrative. www.jocelynrc.com

Dakota Billops-Breaux (2nd Unit Location Sound) is an Anthropology student and long-time Star Wars fan. She accredits her extracurricular interest in film and photography to her mom, an indie filmmaker and her partner in crime on the set of most projects in Dakota's film experience, including Looking for Leia. A Bay Area native, she grew up in the Mission District of San Francisco and the Dimond District of Oakland, and is currently working on finishing her degree in Boston, Massachusetts.

Crystal Chandler (Location Assistant Producer) is a Boston-based media mogul in the making. She's co-host of the award winning local radio show "Boston Come Through" on Boston Free Radio, and the creator of the recently-launched live web series  The Dear Little Project, which aims to flood the internet with positive affirmations for black boys and girls. You can learn more about Crystal, including her love of media, social justice, travel, and youth empowerment, at The Crystal Lens @thecrystallens